In early spring, 1972, Richard Nixon, President of the United States came to Shanghai during his visit to China and
stayed at Jin Jiang Hotel. The one week of negotiation with Premier Zhou En’lai and release of the Joint US-China
Communiqué, Shanghai was named as “one week changing the history” by media both home and abroad. When
President Nixon left our hotel after completing his special historical mission, he left the words that “Shanghai Jin Jiang
Hotel is one of the best hotels I have ever been to.”

April 1993 witnessed Nixon’s third visit to China. Although the President only spent 2 days in Shanghai, he tried to find
time to revisit the Grand hall in Jin Jiang Hotel after the first visit in 1972.

Nixon sighed with endless emotions when he entered the Grand hall. He stood in the central part of small hall and said
passionately in a deep voice that: “I would like to tell all that 21 years ago, the Joint SINO-US Communiqué , started to
be drafted in Beijing, went through further negotiation and discussion in Hangzhou, and was finally released officially
here at the press conference. It can be said that SINO-US relationship kicked off here!” Furthermore, he also invited the
staff who provided high-quality service to him in 1972 to take a photograph with him and revisited the Jin Jiang
Grosvenor House where he had stayed for twice before. 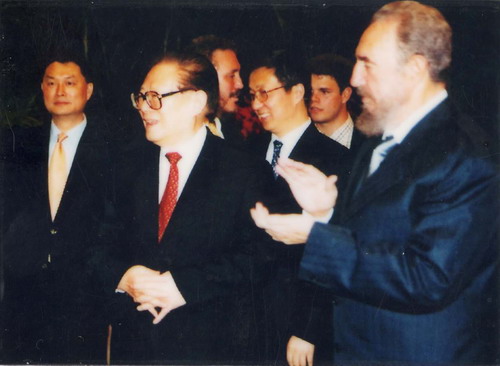 The presidents and the sweet-osmanthus-flavored wine

On the noon of February 28th 2003, in the Grand Hall of Jin Jiang Hotel, President Jiang Zemin met and hosted a
banquet for Mr. Fidel Castro Ruz, the president of Cuba State Council and the Ministerial Conference, alongside were
some major leaders of Shanghai Municipal government.
When the banquet started, President Castro proposed with great interest to have a taste of the Chinese sweet osmanthus
flavored wine.  Generally speaking, it is always those exquisite wines such as sherry, distilled spirit, Brandie rather
than the sweet-osmanthus-flavored wine that the hotel prepares for top-notch banquets.  Finally, after thorough and
compact searching, the only bottle of sweet osmanthus wine was found I old Shanghai Moon, one of the restaurants of Jin
Jiang Hotel and meanwhile, the nearest supplier was also detected under the direction of hotel leaders.

Banquets of great significance can never be too-delicately prepared since anything unexpected may well be encountered.
The sweet osmanthus wine played a crucial role in activating the atmosphere.  After the two presidents savored
the .sweet osmanthus wine, President Jiang Zeming offered to give a box of sweet-osmanthus wine as a gift to President
Castro, who replied in an exited voice, “Thank you so much for your hospitality, but I haven’t prepared anything as a gift
for you!”  During the banquet, the two presidents picked up the topic of the sweet osmanthus wine for 6 times.  When
the tune “the Beautiful Havana (capital of Cuba) was being played by the bank, President Jiang Zemin took the lead to
sing the song happily and loudly before all the people present started to join the song, pushing the already cheery
atmosphere to climax.

Standing at the entrance to the Grand Hall and facing the media from the two countries, the two presidents rejoicingly
hugged and parted.  President Jiang Zemin said in a passionate voice, “I gave President Castro a box of
sweet-osmanthus wine today, which will come to represent the profound friendship between our two countries!”